Las Loras are also characterised by the historical presence of pre-Roman settlements. Some of the most important Iron Age forts are located in this territory; archaeological heritage of first order. These lands were the main scenery for the Cantabrian Wars, resisting the Roman Empire, as shown by the remains of fortified cities and military settlements used for the sieges. Several excavation and research works are being carried out in the main archaeological references such as: Peña Amaya, Monte Bernorio, Ulaña and Monte Cildá. 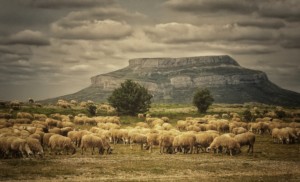