Geotourism is a relatively new and unknown concept. Geo means Earth therefore Geotourism is a kind of tourism based on the “characteristics of the Earth”. Jonathan B.Tourtellot, “National Geographic for Sustainable Destination” director, created the concept defining it as tourism that sustains or enhances the geographical character of a place – its environment, culture, aesthetics, heritage and the well-being of its residents. Geotourism emphasises the relation between tourism and the sense of a place.

It differs from Ecotourism, which only conceives Nature Tourism, and covers everything that comprises a place evolution as a unique and different destination: flora, fauna, geology, ethnography, indigenous breeds, traditional music and dance, archaeological sites, picturesque landscape, handicraft and animals in which traditional food is based on, but mainly the people living in that place.  GEOTOURISM MEANS KNOWING A TERRITORY THOROUGHLY 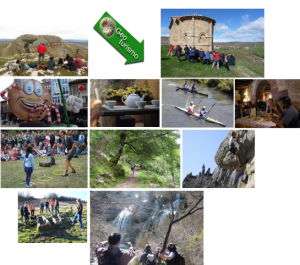 It is creative tourism bringing the traveller closer to the destination and developing unique, participative and creative experiences. This new type of tourism is intended to make travellers assume a greater commitment with the area they are visiting.

Geotourism contributes to local communities’ development and to know how they live, work and preserve natural and cultural landscape. It helps local population to protect its heritage, because it attracts tourists. It is a mutual commitment and consequently GEOTOURISM IMPLIES LAND CUSTODY RESPONSIBILITY.

By visiting genuine places and involving ourselves in their territories culture, we contribute to the maintenance and preservation of landscape, gastronomy, handicraft, ecosystems, but above all, people; promoting therefore their local development and motivating them to keep living and fighting for their dreams.

Las Loras is a perfect geotourism destination. Nature and culture are perfectly interlinked. It is an impressive and unique geological landscape supporting cultural and historical legacy of  unquestionable value and notoriety, providing obvious geotourism potential to the territory and a renewed vision of integrated and sustainable development and organising the basic ingredients within the territory: geological landscape with spectacular morphology and also outstanding historical and cultural legacy, comprising one of the  largest sets of Megalithic, Cave and Medieval-Romanesque monuments both in Spain and Europe.

In short, there are many reasons for Geotourism in Las Loras:

The impressive geological landscape that offers support and coherent interpretation to the territory.

The great set of Romanesque churches, probably the largest in Europe.

The impressive number of cave chapels in Pisuerga and Ebro River valleys.

The plentiful traces of Neolithic settlement represented by the several Megalithic monuments (dolmens and menhirs) throughout the territory.

A large sport establishments and equipment network, both in urban and natural areas.

Optimal situation and accessibility: Burgos is situated no far than 20 km away from Las Loras Geopark. Road access: motorways from Madrid, Valladolid, Palencia and Santander and Burgos-Santander, Burgos-Aguilar national roads. Railway: Madrid-Santander and León-Bilbao. There are also four nearby airports connecting with the territory (Santander, Valladolid, Burgos and León).